The murder of Torben Martin Bødker, a Bosnia-veteran

"Probably he had a psychological flaw in advance, that then worsened by the things he met with in Bosnia," the president of Danmarks Internationale Veteran Organisation (Denmark's international veteran organization), Bjarne Hesselberg, is quoted in an article on politiken.dk, published on Wednesday.

Torben Martin Bødker, a 32-year-old Bosnia-veteran, was shot and killed by two police officers on Tuesday, 9th, 2009. Torben had returned to Denmark from service in Bosnia ten years ago, suffering from severe PTSD. He did not get help.

His family and the veteran's organization tell, that they did what they could, but that Torben was reluctant to talk about his problems. Any wonder?? What is PTSD? PTSD is having looked the inhumanity of, for instance, war in the eyes. Why would anyone, who has experienced that, ever wish to talk about it with the people, who endorse this very inhumanity?? What Torben would have needed, was someone to talk to, who was not a relative nor in any way affiliated with the military. Someone, who would have valued his points of view unconditionally. He did not get that help. Because our society can't accept criticism of its abusiveness. Because it can't accept anyone questioning the necessity and validity of, for instance, warfare. Why it doesn't hesitate a second to label those, who do question as "mentally ill" and "psychologically flawed". More abuse. More warfare.

Torben Martin Bødker went to a hospital, just recently, begging for help. He was sent home. But when his family contacted the authorities to have him committed, two police officers in uniform showed up at his place. He attacked them with a sword. Because he was "mentally ill", "nuts", as the media tells us? NO!!! Because he felt cornered, and had to defend himself!

§10, subsection 2: "The committing physician should if possible be present at the implementation of the involuntary hospitalization." (my italics)

§12: "The executing police officers should if possible be in plain clothes." (my italics)

A system, that doesn't only deny people like Torben Martin Bødker the least help , but into the bargain denies them help in order to later on in the process assault and kill them - in the name of "help" - is a grossly abusive system. And it is a grossly failed system in regard to real help. When will this change?! And when will the media stop covering this system's ass?! 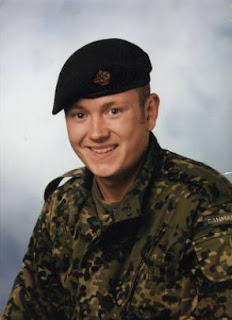 Read also: Sholom Keller, A Letter To My Shrink,
Doug Bremner's blog post DSM V Shadow Team Strikes Back at Psychiatric Establishment on PTSD,
and an update to this post.
Posted by Marian at 19:55

I'm sorry if this sounds glib. I did not know Torben Martin Bødker.
It is meant to be cynical.

If you are sane enough to ask for help, it means you don't need help.

When forced help comes, things go badly.
___
From the book-movie Catch 22.
Doc Daneeka says, “He has to be crazy to keep flying combat missions after all the close calls he’s had. Sure, I can ground Orr. But first he has to ask me to.”

“That’s all he has to do to be grounded?”

“And then you can ground him?” Yossarian asked.

“You mean there’s a catch?”

“Sure there’s a catch,” Doc Daneeka replied. “Catch-22. Anyone who wants to get out of combat duty isn’t really crazy.”
_____
Doc says, “He has to be crazy to keep on living after all the shit he’s had happen to him and experienced. Sure, I can help Torben Martin Bødker. But first he has to ask me to.”

“And then you can help him?” an unseen voice askes.

“You mean there’s a catch?”

“Sure there’s a catch,” Doc replied. “Catch-22. Anyone who wants to get help isn’t really crazy.”

Mark: Not glib at all. Spot on.

I am a Bosnian vet, and came back to the states in 97 after serving for 9 months. I'm very sorry for what happened to this man and very sad having read this. Personally, I have anger management issues that may or may not be a result of my service. However, I do know that several of my platoon mates were either fired from jobs, got devorces or had other negative experiences when they came home.

Anonymous: I thought, things weren't as messed up here in Denmark as they are in the U.S., since everybody in this country has health insurance, and there's parity for "mental illness". Apparently, I was wrong. No insurance, or parity, or whatever, can make up for only one-size-fits-all-second-rate-treatment options offered.

But what really gets me here (too), is that they stop at nothing in order to escape responsibility. Not even at declaring the individual as "psychologically flawed". Disgusting.