It's enough to drive you to despair, but nevertheless I was laughing my ass off when I read this article yesterday.

So-called "assisted outpatient treatment", make that involuntary or forced outpatient "treatment", has been discussed a lot again in Denmark lately. Both shrinks and relatives think that it is simply too bad that the current Danish legislation doesn't allow for forced "treatment" after someone is released from a psych prison, which according to the article results in some severely ill people throwing out their, as the article has it, "necessary" dope again and again at the first occasion, and becoming "psychotic" once again.

The article quotes the former Danish Health Minister, Jakob Axel Nielsen, who was preparing a bill that, if followed up by his successor, Bertel Haarder, and passed by the Folketinget, will come into force in October this year, allowing for involuntary outpatient "treatment" for people who've been re-incarcerated three times, and at least one of these times because they stopped taking their "medication":

"I simply hope that involuntary outpatient treatment will reduce the use of involuntary treatment as far as these patients are concerned."

With such an outstanding ability to reason logically, it is no wonder that politicians are so easily deceived by the shrinks' and NAMI-relatives' "logic".
Posted by Marian at 01:08 5 comments:

Bottom line: if people weren't doped up over their eye balls with consciousness reducing, brain damaging drugs, if they weren't told depressing, demoralizing and pacifying lies about a chronic, biological brain disease, but encouraged to look for the existential, spiritual meaning of their personal crisis, there'd be a lot more than 19% who'd recover fully. It's still a long way from these 19% to the 85% of alternatives like Soteria.

Merete Nordentoft wants the period people are "treated" under the OPUS project to be extended from two to five years. Half of the participants in the study were "treated" under OPUS during the first couple of years. The article doesn't say anything about these participants doing better than the other half, on the contrary: "We don't know to what extent the prognosis depends on the treatment, even if some individuals certainly have improved thanks to the treatment." -Merete Nordentoft, in perfect self-contradiction, as well as in perfect contradiction to her own research results.

I'd say, what we'd really need isn't more OPUS, but to have the Danish Fuller Torreys (yes, Merete Nordentoft really believes there's something to Fuller Torrey's cat poop nonsense... ) replaced by Loren Moshers. The whole incompetent (they can't even interpret their own research results) bunch of them. Merete first.
_______________

"More about Merete Nordentoft's surprising (NOT!) research results on 'schizophrenia'"
Posted by Marian at 02:13 No comments:

More about Merete Nordentoft's surprising (NOT!) research results on "schizophrenia"

The main emphasis of the article, whose title translates into: "High school certificate a good weapon against schizophrenia", is on the role of education in terms of recovery from so-called "schizophrenia".

The researchers followed 547 people labelled with "schizophrenia" over a 5-year-period.

Results: 19% achieved full recovery, most of them, as mentioned in my previous post, were not "treatment compliant", respectively didn't use psych drugs at all. 15% achieved significant improvement. 53% didn't achieve lasting improvement, but are able to live independently, and without longer hospitalizations. 13% are dependent on assisted housing, or need long-term hospitalization.

Among those who achieved full recovery or significant improvement, a higher education is prevalent, most of them are women, and most of them come from a family background with both parents living together. On the other hand, "negative symptoms" like social withdrawal and passivity indicate a less favorable outcome.

Education: the so far only comment on the article at Dagens Medicin (the journal only allows professionals to comment... ) concludes that a higher education equals to a higher IQ which equals to more benefit from CBT - "something we've known for a long time".

In my opinion, a higher education equals to the ability to search for information on one's own, if necessary - and when it comes to "mental illness" it is necessary, since true information in Danish is thin, to put it mildly - also information in foreign languages like English. Information that may have the individual choose to, by and large, do without neuroleptics, that may have him/her question the (Danish) mh system's messages about a chronic, biological brain disease, and that may have him/her investigate into alternative views of the experience. A higher education often equals to a stronger belief in one's own intellectual capacities, "intellectual self-reliance", so to speak, and thus to less blind confidence in others' - the "experts' - authority.

A higher education often provides tools to think analytically, critically and independently. Invaluable tools when it comes to finding meaning with one's experience, and become an expert on one's own behalf: "I know what's good for me." It's called empowerment, and it's decisive in the recovery process.

Drugs: well, I'd say, it's self-evident that substances which interfere with and reduce cognition, memory, self-/consciousness, etc., which in fact often render researching, googling, reading and understanding unsurmountable challenges, are not helpful in the process of resolving crisis.

Women: in general, women are more socializing than men, and don't have the same reservations against opening up and talking about personal problems. And if people who experience crisis need anything, it is the possibility to communicate their experience to someone they can trust unconditionally.

Family: a somewhat well-functioning family can be a valuable resource of support. Especially if family members are minded to resolve problems rather than to just brush them under the carpet, or run from them.

It doesn't look like the researchers have done much else than gathered statistics about "symptoms" experienced, hospitalizations, education, family background, and whatever else can be observed from the outside. Also this study seems to be a shining example of the lack of empiricism in psychiatric "research" in general. Participants obviously were not asked what in detail was helpful for their individual recovery. As a result, the researchers stand with a bunch of data they, due to their preconceived idea of the nature of "schizophrenia" - it's still referred to as an "illness", of course -, and the resulting preconceived idea of what kind of treatment is indicated, don't really know what to make of.

Probably, their reasoning will not go beyond conclusions like the one mentioned above, that CBT is the decisive factor, while they just as probably will be unlikely to admit the quite logic causality between "treatment" with consciousness reducing, and in the long run brain damaging substances and long-term outcomes. Actually, the article explicitly states, that "antipsychotics" are effective treatment for "psychosis": "Don't draw the 'wrong' conclusions from the research results! Take your meds!" Also, an undertone can be traced in the article that clearly emphasizes that "full recovery" doesn't mean "cured". "Schizophrenia" still is a chronic brain disease: "You're still ill! Don't you dare to believe anything else! You're only as lucky as to be in remission!" So, it is unlikely that this study will change anything about how "schizophrenia" is perceived by the "experts", or how it is being treated. Concerning the fact that most of the fully recovered participants either went off neuroleptics, or never used them, this is probably not interpreted as a precondition for their recovery ("remission"), but rather as a result of it. Just as the article doesn't mention the connection between "negative symptoms" like social withdrawal and passivity on the one hand, and the these "negative symptoms" increasing effects of neuroleptic drugs on the other, with one word.

If at all this study makes it to one of the major journals in the field, I suspect it will suffer the same fate as other long-term outcome studies, and soon be buried in the archives, under a load of crap like Thomas Werge's eugenic "research", that allegedly found the genetic cause of "schizophrenia" to be chromosome mutations which are found in 60 - 90% of the general population... (Can't recall whether I wrote about it here, but well, now you know: 60 - 90% of the general population are genetically predisposed to develop "schizophrenia". In other words: to be a human being predisposes you for "schizophrenia". LMAO.)

BTW: the article calls OPUS a "psycho-social" project. Not by any stretch of imagination can I find much "psycho-social" about a project that explicitly promotes " - psycho education with weight on a biological model (guilt reducing)", and "antipsychotic medical treatment" as "indicated" for "most of the patients".
Posted by Marian at 22:36 2 comments:

New Danish research shows that "schizophrenics" do better off drugs

Oh really?! You don't say! Yup. And Merete Nordentoft who led the research, is dumbfounded with this result: "Most of the participants who achieved full recovery, didn't take medication after five years. Some of them actually managed entirely without medication. I didn't expect this."

Well well, what did you expect, Merete?? Merete Nordentoft is the Danish "expert" when it comes to "schizophrenia". How is it that the Danish "expert" on "schizophrenia" seems to never have heard of any long-term outcome studies like Harding, et al., 1987, or Harrow, Jobe, 2007, of the WHO-studies, of Soteria, Open Dialog, and and and?! Maybe she doesn't speak English? I mean, we all know that shrinks usually are not the sharpest tools in the shed among medical professionals... Which leads me to another interesting result of the study. But since it's really late: more on it, link and so on, tomorrow.
Posted by Marian at 03:32 4 comments:

"Here's to double-sided instead of one-sided brain damage" ???

I never thought I'd consider to defriend anyone on Facebook, but when I yesterday learned through my home page there that a Facebook friend of mine obviously is a proponent of ECT (and in addition also a friend of a certain Ronald Pies, MD ...), I suddenly found myself seriously considering to defriend. Is it me who's judgemental? I can't help it, it feels a little in conflict with my integrity to be as much as Facebook friends with someone who's a proponent of something I regard torture, and that in my opinion ought to be banned entirely. - No, I'm not "pro choice" when it comes to ECT.

On another note, the person in question states on her blog that "most sources [concerning the difference between unilateral and bilateral ECT] were dated in the last century and not very reliable". So, Harold Sackeim's study, though not "dated in the last century" (makes it sound like "dated in the Middle Ages", doesn't it? And guess if that's not what is intended... ), obviously is "not very reliable". Prejudice, anyone?
Posted by Marian at 10:57 No comments:

I've always been convinced that using figures instead of words must have been invented at about the same time as text messaging became popular. Until I saw the pedigree of my thoroughbred mare: Pot8os. He lived from 1773 to 1800. A son of famous Eclipse. 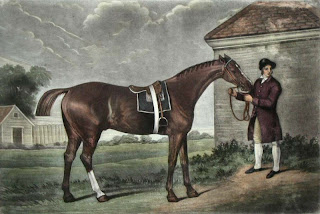