BTW: "How come I gotta wake up early to go to work," is something I also often ask myself, me too...
Posted by Marian at 01:46 No comments:

When I was about 17 I came down with an inflammation in my left knee, a reaction to overwork. I wasn't aware of that, so went to see my GP for an explanation of what was going on. As it is GPs - and virtually all other doctors' too - habit, he prescribed one of Big pHARMa's wonder cures. This was a new drug, that still was in the experimental stage, not yet fully approved. So, yeah, I was acting guinea pig for Big pHARMa.

Luckily, I didn't experience as much as one of all the in part rather frightening possible side effects listed for the drug. And it did the trick, rather quickly in addition. I maybe was on that crap for ten days. At the most. I wouldn't even have started to take something with such side effects as those listed, if I'd been told I would have to take it for at least several weeks or months, not to mention for the rest of my life. And the side effects still were somewhat harmless, compared to those of psych drugs.

Anyhow, had I experienced as much as the suspicion of only one single side effect, I can assure everyone, I'd instantly thrown the pills out. That is, I had not waited for my GP to tell me what to do. I'd stopped taking the poison here and now. I've never had excessive trust in the products of the pharmaceutical industry beforehand. Neither in the infallibility of medical expertise. The only reason I gave these pills a try was that I couldn't wait to be able to get back on horseback again, which the inflammation in my knee prevented me from.

Now I wonder how on earth it is, that I hear so many people report all sorts of intolerable side effects of psych drugs, as in this blog entry for instance, while, nevertheless, these people stay on the drugs, waiting for their doctor to decide for them what to do. How come? What keeps all these people from taking control of their life, their well-being, themselves, instead of leaving it with someone, who obviously doesn't care and/or is rather incompetent?? I really don't get it. Is it the spellbinding effect? Can it be the spellbinding effect, when someone realizes they're experiencing side effects, that it is not the "illness" that causes the misery? Is it some sort of half- or unconscious need to repeat the trauma: "I don't deserve to feel good. - But since society doesn't accept a conscious choice of emotional suffering, I choose the suffering the side effects cause"? Or are people really that alienated from themselves that they unconditionally trust in anybody else but themselves to know what's good and right for them, even though their body and soul is screaming at them that this is not so? Anyone?

To prevent misunderstandings: Of course I'm not talking about people who are forced to take psych drugs. That's a different story.
Posted by Marian at 14:33 8 comments:

Mari Boine - A voice against oppression

Norwegian-Sami singer Mari Boine on the oppression of the Sami people and their culture, including the Yoik, the traditional Sami chanting:

Beyond Belief. Alternative Ways of Working with Delusions, Obsessions and Unusual Experiences, by Tamasin Knight, with a preface by Rufus May, is now available as a free download at peter-lehmann-publishing.com. 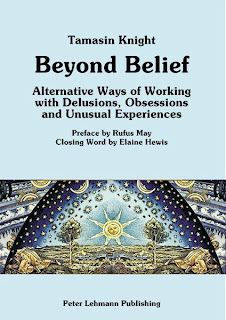 I've only had a short glimpse at Rufus May's preface so far, but the book certainly looks like great reading. Here's the description from Peter Lehmann's website:


"Tamasin Knight's first book Beyond Belief explores ways of helping people who have unusual beliefs. These are beliefs that may be called delusions, obsessions, or another kind of psychopathology.
• Psychiatric treatment attempts to remove these beliefs by medication and other methods. The new approach described in Beyond Belief is different. It is about accepting the individual's own reality and assisting them to cope and live with their beliefs.
• Beyond Belief explains the new approach in a very readable format.
• Many psychological techniques to cope with unusual beliefs are described. These include strategies to reduce fear, strategies to increase coping and problem solving techniques.
• Ideal for mental health professionals, service users/survivors and carers.
"Beyond Belief offers us a ground-breaking way of helping people deal with unusual beliefs. In Bradford we have found this publication it to be extremely helpful to service users, workers and as the inspiration for a new self help group. I am sure that this publication will enable more people to benefit from this knowledge and approach and help us change the way we as a society approach beliefs we find unusual." (Rufus May; Clinical Psychologist, Centre for Citizenship and Community Mental Health, Bradford University, England)"
Posted by Marian at 18:49 4 comments:

As you may know, Ray is a 55-year-old Minnesota resident who has
received more than 40 involuntary electroshocks (also known as
"electroconvulsive therapy" or ECT).

Adding to his horror, Ray received these court-ordered procedures
against his wishes -- and even against his family's wishes -- on an
OUTPATIENT basis. That is, Ray would be woken up early in his group
home, and escorted to a hospital for his forced shock over and over
and over again.

Ray asked for help from MindFreedom, which kicked off a Ray campaign
activating people internationally.

Today, Ray said because of his campaign his new psychiatrist -- who
opposes forced electroshock -- has been officially approved by the
mental health system.

Ray already has a new attorney, who is moving toward changing Ray's
guardianship.

Meanwhile, because of the campaign the Minnesota state legislature has
scheduled a hearing this Monday, 10 August, on the subject of
electroshock of committed Minnesota residents.

For more info about campaign news, see the Ray Gateway at:

At the start of this Saturday's MindFreedom Mad Pride Free Live Web
Radio show -- which is on the topic of humane alternatives to this
kind of abuse -- you can also hear news updates about the Ray
Campaign, see:

poppies - and a thought 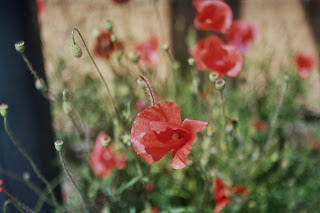 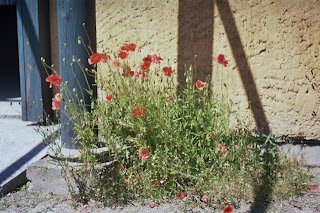 The most marvellous monstrosity ever. Not the poppies. Humanity.
Posted by Marian at 14:38 2 comments:

Labels: just a thought, the good things in life

The roots of violence