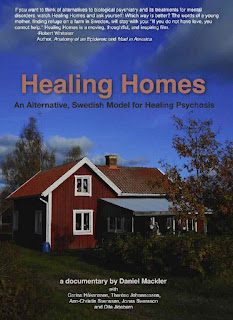 Yesterday morning, Daniel Mackler's new film Healing Homes. An Alternative, Swedish Model for Healing Psychosis was in my mailbox. I've watched it four times since then.

If you know Daniel's previous film, Take These Broken Wings, this one is different. Healing Homes is an informal, often contemplative, and also raw, and at the same time very intimate and personal film.

Instead of the carefully staged interviews we saw in Take These Broken Wings, in Healing Homes Daniel Mackler takes a step back as a director, and leaves the scene almost entirely to the participants in the film, joining them only as just one more participant himself. This allows him to capture the essence of what Familjevårdsstiftelsen, the Family Care Foundation, in Gothenburg, Sweden, is all about: fearless openness and authenticity. Take These Broken Wings showed us, in a very professional way, how full recovery from "psychosis"/"schizophrenia" without drugs is possible, even likely, with the help of a professional therapist. Healing Homes goes further, not only explicitly revealing a truth about the human being Carina Håkansson, founder of the Family Care Foundation, but indeed revealing the truth about crisis to be a state of being human to an extreme extent that can be understood and overcome with the help of other human beings who are not afraid to be extremely human themselves. This is what this film is about. The healing power of being oneself, genuinely, uncompromizingly. And not just behind the closed door of a therapist's office, but in all life situations, which is what the family home, "det utvidgade terapirummet", the extended therapy room, invites to.

Just like Daniel Mackler himself, I'm quite suspicious of professionalism in the field. As the Norwegian psychologist Christian Moltu wrote in his article "Det konkrete, mellommenneskelige" (The actual, interpersonal) in 2009, all too often therapists make use of therapy techniques, of their professionalism, as a kind of shield they can hide behind whenever they don't manage to stay present, and truly meet their clients where these are at. Healing Homes nevertheless has convinced me that professionalism can be of great value if it is used as a means to prevent exactly this distancing, alienating, the other dehumanizing use of itself, if it is used to help the therapist, and whoever else interacts with a person in crisis, stay present with the person in any given situation by being "professionally" human, conscious about and self-aware of one's own as well as the person in crisis' humanness.

"It's about people, and... people. Giving love to people", Therése says in the film about the Family Care Foundation. And it is what the film not only is about, but what it actually does, fearlessly and uncompromizingly with great respect and love allowing people to be who they are. I've watched Healing Homes four times now, each time discovering new, fascinating details. It's a film I'll watch again and again. For the details, but first and foremost for its love for people that is the magic behind the success of the Family Care Foundation as well as the magic of this film.

Order the film here: http://www.iraresoul.com/dvd2.html, and watch it, again and again.
Posted by Marian at 02:39

Thanks for highlighting this DVD. Without viewing it yet, it strikes me that this film would also serve to teach families how to treat their own relative at home. That doesn't have to involve pointing the finger at them and claiming that the psychosis is all their fault. There's such a disconnect in mental health care. It seems so simple, teach the families instead of outsourcing the job. Instead, care in acute psychosis is seen as the preserve of hospitals, or somebody, anybody, other than the family in the case of Soterias.

Rossa, yes, and the Family Care Foundation also works with families without always placing the person in crisis in a family home. But sometimes I think, it is the best thing to do, to get the person out of a dysfunctional environment that may take its time to change. The person in crisis may not have the time to wait for that to happen. Also, as I see it, many of the people who are helped by the Family Care Foundation don't have a family of their own to go and live with, and get supported by. They are people, who've been in and out of hospital, living in a group home, or something alike, when not hospitalized. Maybe they have a father here, and a mother there, who are living under circumstances that simply aren't supportive for someone in crisis. For instance in a small apartment in a neighbourhood with criminality, alcohol and substance abuse, etc., or just with neighbours right next door, who don't want to be disturbed, leaving no room for someone in crisis to be in crisis. Maybe their family struggle themselves to get through the day. Not everybody has a family that has at least the potential, emotionally, as well as economically, to do the work that needs to be done, and to provide the environment to support a family member in crisis. And not all families are motivated to do the work, even if they have the potential.

As mentioned before, to me personally it was extremely important that I did not have to live under the same roof with my parents during acute crisis, i.e. during a period of time where I still felt responsible for and guilty about their dysfunctionality and their resulting misery. It would have meant an enormous, additional pressure on me that I don't know if I'd been able to take without going even more "nuts". Also I think, there's a greater temptation for the family to carry on scapegoating the family member in crisis when this family member remains "available" in the home of the family. Which may slow down the process of self-reflection and transformation in the family.

This looks like a great program.
We need more of them - around the world!

Thank you for posting the information.

I hope you're doing well, with your move and new job.

thanks for posting this review, Marian. I loved it. wow!
with respect, Daniel

Hi
I have just found your blog which I find fascinating, Marion, although I am disappointed that you haven't posted recently. I hope all is well. I wonder if you would do me the favour of looking at my blog 'Schizophrenia at the Schoolgate' which can be found on Blogspot.
I am seeking advice on whether or not to 'go public' with my story and I have a feeling that you might be just the person to help me on this one, if you wouldn't mind doing so.

Hi Anonymous, thanks for your kind words! Blogging has been slow for a while, yes, as "real life" got too fast to leave me much time for it.

To your question: that's not an easy one. I've had a quick look at your blog tonight -- I will certainly read more as soon as I got the time -- and I see what you mean. You've got a network, but you're not sure whether this network will still be there if you "go public". My own thoughts about possibly losing some of my friends were that I didn't want to be friends with people who would shun me because of a label, anyway. So, you might say, I had nothing to lose.

A lot more tricky it becomes, though, when we're talking employment. I wouldn't advise anyone to disclose a past with a psych label, certainly not if the label says "schizophrenia", when they apply for a job. Unless they've had the opportunity of a casual chat with their possible future employer about "mental illness" in general, where s/he turns out to be free of any prejudice.